PES Women: Not all tasks can be shared. But most of them can. Let’s close the gender pay gap now, together!

The campaign marks Unequal Pay Day, the symbolic moment when women start working for free compared to men. For the rest of the year, women are effectively giving employers their time, energy and creativity with nothing in return.

Equal pay for equal work or work of equal value has been enshrined in the European Treaties since 1957. Yet, today the average pay gap between men and women in the EU (including UK) is 16%. In some countries, it is far higher. According to a new study by the ETUC, unless urgent action is taken the pay gap will not close until the year 2104.

The reasons for the gender pay gap are numerous, but one of the biggest factors is the unequal share of unpaid care and domestic work between women and men. That is why PES Women and zij-kant have made it the focus of this year’s campaign.

“Across Europe, women are more likely than men to be the primary carer of children and other dependants. Too often, women are paying the price of parenthood. This leads to lower employment rates for women and impacts their economic independence negatively. Women, especially mothers, spend less time than men on paid work, but considerably more time – 13 hours more per week – on unpaid care and domestic activities, which are just as important to keep society running. This imbalance has only worsened during the pandemic.

“That is why, in addition to legislation on for example pay transparency, measures to enable equal sharing of generous parental and other care leaves, affordable access to quality childcare, and flexible work-life balance policies are so important.

“This year’s campaign slogan is ‘Not all tasks can be shared. But most of them can.’ Featuring the work of Belgian photographer Frieke Janssens, we want to highlight the important role men must play as parents and carers if we are to close the gender pay gap. It is time to smash old stereotypes about parenthood and work. This will require political will and systemic change at both national and EU level.”

Closing the gender pay gap is a long-standing priority for PES Women. We want the EU to introduce binding targets to close the gender pay and pension gaps by 2030, new criteria for assessing work of equal value, gender pay gap audits and other binding pay transparency measures, as well as sanctions for non-compliance, after consultation with social partners. All Member States must move forward on the Work-Life Balance Directive, making sure parental and care leaves are properly funded. Intersectional anti-discrimination and anti-harassment legislation, EU quotas for women on boards, higher minimum wages, and increased funding for the EU care economy and welfare states are also important steps to ensure women’s economic independence.

The picture with translation in your own language can be downloaded here. Please mention photographer Frieke Janssens.

The average gender pay gap in Europe is 15.7%. This is the difference in average gross hourly wage between men and women across the economy.

The average gender gap in pensions in Europe is 30.1%. This measures the differences in pensions between women and men (65 years or over). 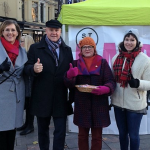